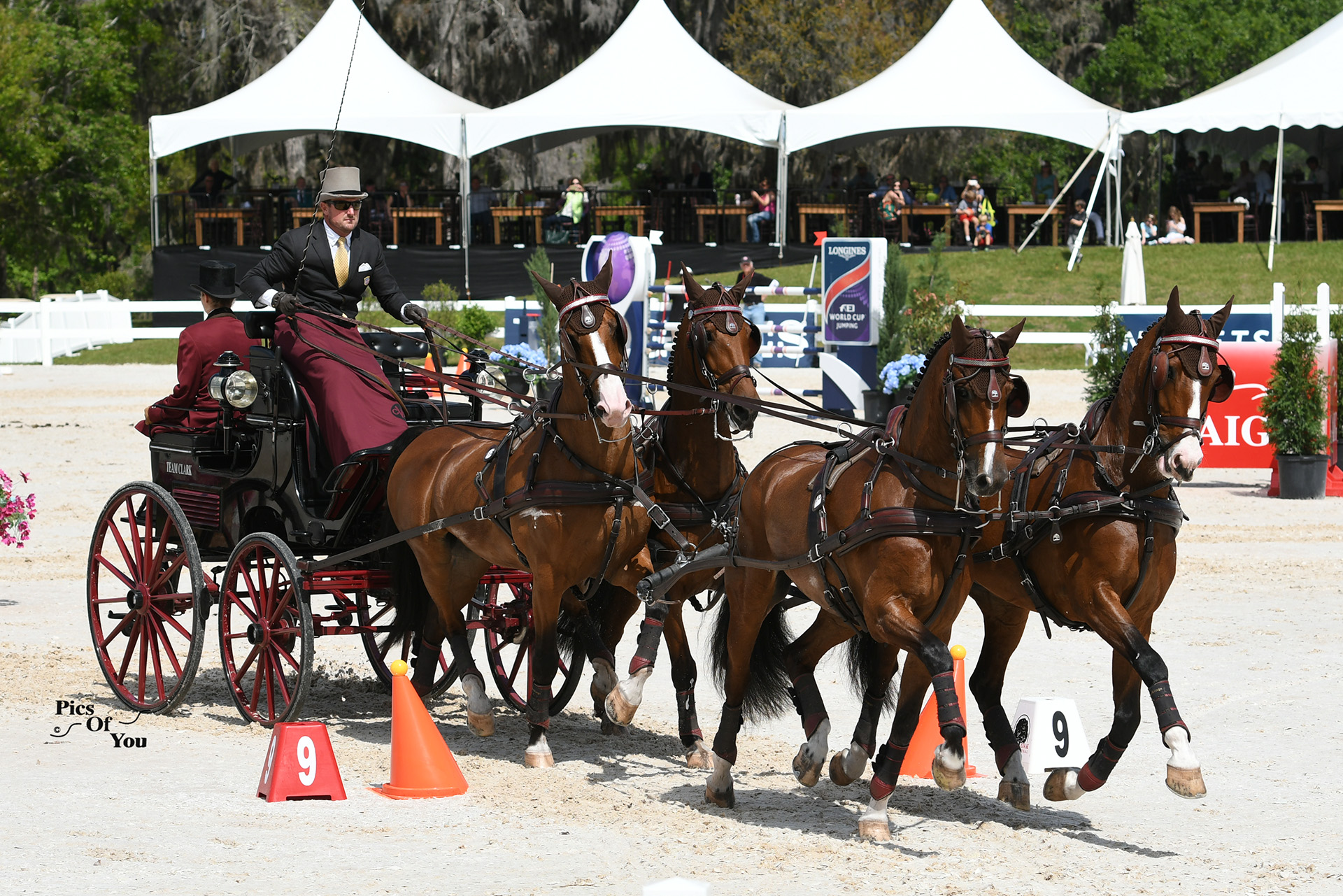 Chester Weber, Ocala, FL, won a record 15th USEF Four-in-Hand National Championship title Sunday at Live Oak International. Leading from start to finish, Weber and his team earned an impressive 40.11 in dressage, blazed brilliantly around the marathon with just 123.58 points added, and had only one ball in the third phase to win. Weber also earned the Jean Keathley Perpetual Memorial Trophy for the best FEI dressage score.

“I have hopes that they’ll be my [FEI World Equestrian Games] team,” Weber said of four horse team of Splash, First Edition, Boris W and Asjemenou. “Live Oak is always a little confusing for the horses because they have the World Cup Qualifier show jumping with flowers and everything built in the arena, which isn’t typical in our sport. But they handled that. I was really pleased with how they worked today. I think this is a team that can consistently go clear and hopefully will be good enough to get us on the medal podium in Tryon in September.”

Lisa Stroud, Kennett Square, PA, held onto the reserve champion position after a competitive cones course. She and her team had three balls down and picked up 0.34 time penalties for a total of 190.21 points. James Fairclough, Newton, NJ, also remained in his marathon position. One obstacles fault and 2.09 time penalties gave him a third place result with a score 194.43.

This is the first year that U.S. Equestrian offered Intermediate Combined Driving National Championships, and the competition was fierce as the marathon leaders looked to grab the inaugural titles.

Single Pony overnight leader Jennifer Keeler, Paris, KY, piloted her own Zeppo to victory, adding nothing through the Obstacles phase for a final result of 144.7.
“It’s the most incredible fairy tail possible,” Keeler smiled. “I think it’s safe to say if you had asked anyone, they would have expected it to be with our other pony. Amazing Grace is certainly our star pony, and she’s done some great things, and the whole time Zeppo just waited for his chance. This was his chance and it’s just incredible that he was able to do what no one thought he could do.”
Janelle Marshall, Williston, SC, who had the fastest time through the cones, finished as reserve champion with John Merritt’s Kennebec Joyce on a final score of 145.89. Third place went to the dressage leader Kristin Whittington, Edinburg, IN, and Symphony, who added 3.63 time penalties in Obstacles to end on 154.15 points.
After taking over the lead of the Intermediate Pair Pony Championship on Marathon day, Katie Whaley, Paris, KY, solidified her win with a faultless trip around the cones course. She finished the weekend on a final score of 140.29.
“I’m so thrilled that the USEF has decided to acknowledge these levels on a national stage,” the international veteran said of her first Intermediate level championship. “It’s going to enhance the driving in this country. Everyone works hard on every level, and to be recognized in the Intermediate is exceptional. This really shows good things to come for the sport of driving.”
Boots Wright, Ocala, FL, had one ball down, but finished within the time to earn the reserve champion title. She and her pair of Marko and Mista Q closed out the competition with 146.37 points.
Jennifer Thompson, Lodi, WI, carefully maneuvered her own Funnominial C.G. to take home the Intermediate Single Horse Championship title. Her 0.21 time penalties brought her to a three-day result of 140.94.
“I’m still on Cloud Nine. I came to Live Oak in previous years to watch. Last year I volunteered. This year, we came for the experience, and to learn what Live Oak is about. I never anticipated being in this position,” she said. “We trained all winter in Wisconsin. I was driving when it was 13 degrees out. It feels good that all that effort and my frozen fingers paid off.”
Taylor Bradish, Windsor, SC, and Katrin Becker’s Katydid Duchess had one ball down, but maintained their second placed standing. They finish on 153.24 points. With one ball down in the Obstacles course, Anna Koopman, Middleburg, VA, and Night Chief Lms jumped from sixth after Marathon to finish in third on a final score of 153.69.
Scott Adcox, Sarasota, FL, piloted Nupafeed Auto Pilot and Pepe to the Intermediate Pair Horse title. Looking to gain experience for his pair, Adcox had three cones faults and 10.44 time faults for a weekend score of 185.39.
“It’s great that we’re going to start to recognize the lower levels and what they accomplish. Thinking we can build the sport from the top down is a little silly, so we need to try and encourage the lower levels to move up and encourage more people into our sport, so we have a sport in the future,” Adcox said.
In addition to the Jean Keathley Perpetual Memorial Trophy won by Chester Weber, the Anne Bliss Perpetual Memorial Trophy was earned by Four-in-Hand driver Misdee Wrigley-Miller as the most elegant lady rider. The Ed Young Memorial Trophy was presented to Anne Marie Turbe as the Most Valuable Official.
Live Oak International is the only show in the United States that offers both combined driving and show jumping, attracting some of the country’s most talented riders and drivers. It was also the last opportunity for show jumping riders to qualify for the Longines FEI World Cup™ Final , April 11-15, in Paris, France.
« Adcox, Keeler, Thompson and Whaley Lead Inaugural Intermediate Combined Driving Championships After Marathon
Vanderveen Clinches Trip to Longines FEI World Cup Final After Victory at Live Oak International »