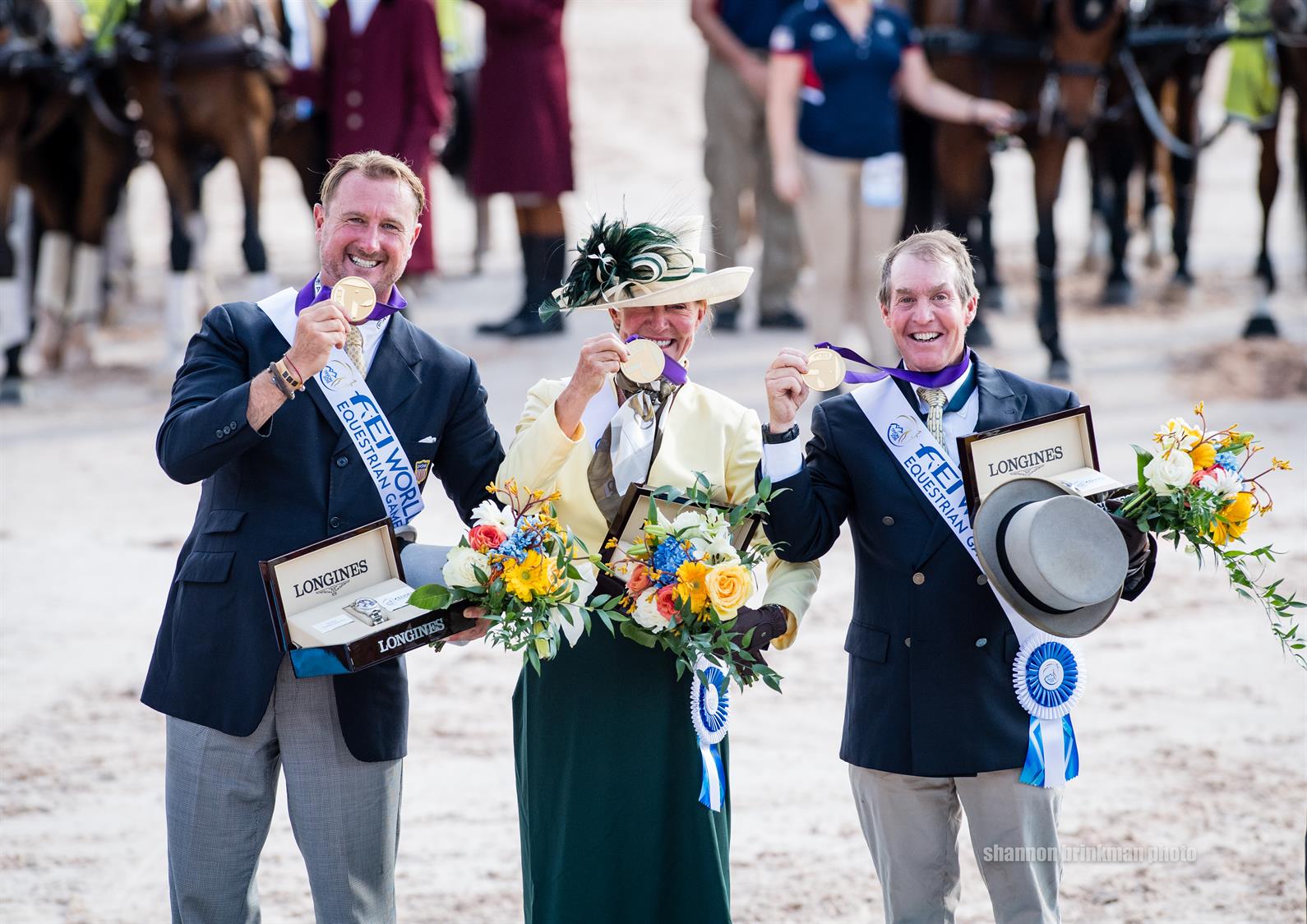 Weber added, “What also makes this team gold medal extra special to the three U.S. drivers, there was a wonderful man who passed away a year ago, [Chef d’Equipe] Ed Young. He was the force around US Equestrian’s program and led the way for a number of years, and today, when the reality was there that we won team gold, to me personally, for me and this team medal, that’s for Ed Young,” added Weber.

“It was wild in there; really tight. My horses were so responsive and wonderful and made the most of a really tough course,” said Wrigley Miller, who earned her first WEG medal. “There was one spot to make up some time, but it was followed by so many sharp turns . . . but my horses were brilliant.”

“I had a hard time [on course] today. They were fighting me a little bit and they got really strong,” said Fairclough, acknowledging the broken noseband. “I couldn’t figure out why it was so heavy. It was a very technical course, so that already makes it a little difficult to be quick, and I felt myself a little late. I was hoping it would be a little smoother than it was, but it got rough and a little jerky, but that’s the name of the game.”

The U.S. sat in the bronze-medal position with Weber (Ocala, Fla.) as the second from last in the order. The team gold medal depended on a cautious completion with Splash, Jane Clark’s 15-year-old Dutch Warmblood gelding; First Edition, his nine-year-old KWPN gelding; Reno, his nine-year-old Hungarian gelding; and Boris W, his 12-year-old KWPN gelding. The double-WEG silver medalist and his team delivered in true fashion, adding only 2.77 time penalties to solidify the gold medal.

“It is a lot of fun to be on this team. When I was introduced to combined driving, Jimmy was my teacher; I was 13 years old. I remember when Misdee came up to me at the Florida State Fair and wanted to get into carriage driving, so it was really humbling and nice to be here. [Winning gold] was a surprise. I thought we came here with a chance at a medal, but if you asked me to bet on if we would be the world champions at the end of the week, I would have said ‘I’m not sure.’ ”