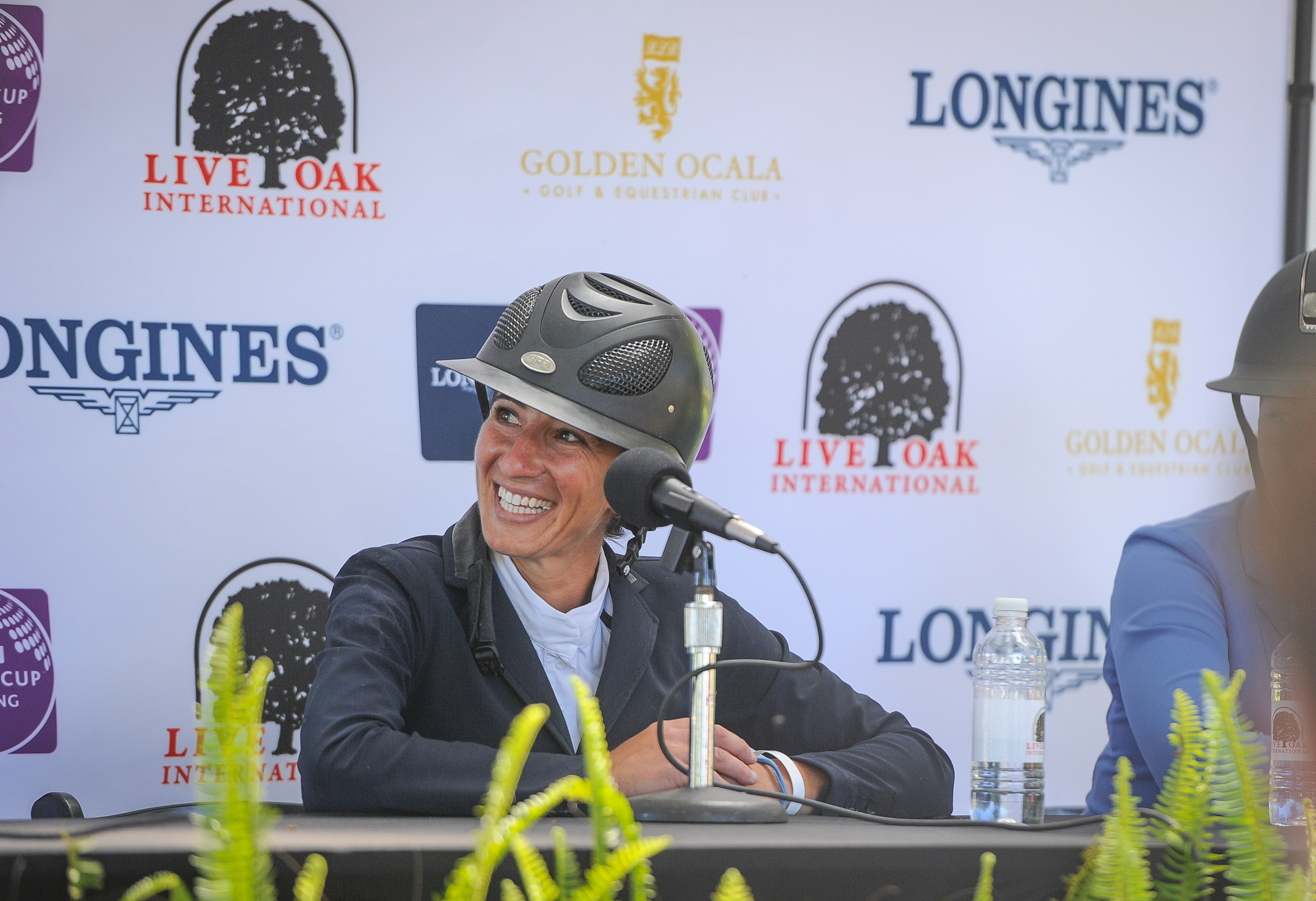 Tisbo had the fastest time around the competitive jump-off, crossing the Longines timers in 43.38 seconds with the 9-year-old Belgian Warmblood.

“She’s a little bit green for her age, so we’re just moving her up to the 1.50m level. We’re still in the process of trying to go as fast as we can, but still jumping clear to build her confidence. That was the plan: be as competitive as I can for my horse,” she commented.
“I’m a pretty competitive person,” she continued. “My trainer luckily reminded me as we were walking in to ride my horse’s round, and to do the best I can for her.”
Two clear rounds and a jump-off time of 44.41 seconds gave Chloe Reid and Live Oak Plantation’s TNT Explosive a second place finish in Saturday’s class.
“They always say looking back that there’s things you would change. I definitely think I could’ve been faster the beginning half of the course, but I was really happy how he finished,” Reid said.
Fresh off a win in Friday’s $10,000 Waldron Private Wealth 1.40m Power and Speed class, Kady Abrahamson finished third with Abrahamson Equestian’s Bugatti. The last of the three clear jump-off rounds, Abrahamson clocked a jump off time of 48.96.
Tisbo is one of a handful at Live Oak International who are in the running for the upcoming Longines FEI World Cup™ Final, April 11-15, in Paris, France. Sunday’s $100,000 Longines FEI World Cup™ Jumping Qualifier Grand Prix will make the final determination as it is the last qualifying opportunity.
“I have a shot, but it’s a little bit of a long shot. I have to jump well tomorrow and have a good placing. That’s been my focus of this show this week,” Tisbo said. “I’m really happy with how my horses are going, so I guess you could say now it’s just up to me to keep my head on straight.”
The Longines FEI World Cup™ Jumping Qualifier gets underway beginning at 1:30 p.m.
Live Oak International is also hosting five USEF Combined Driving National Championships including Four-in-Hand, Intermediate Pair Horse, Intermediate Single Horse, Intermediate Pair Pony, and Intermediate Single Pony divisions. Drivers take on the nail-biting Obstacles finale Sunday at 8:00 a.m.
Live Oak International is the only show in the United States that offers both combined driving and show jumping, attracting some of the country’s most talented riders and drivers. General admission tickets are available online and at the gate for $10. Children under 12 receive free admission. Parking for the competition is also free. For those who cannot attend this year’s event, all competition can be seen live at www.liveoakinternational.com/watch-live/.
For results, visit www.liveoakinternational.com/show-results
« Ryan Delivers One-Two Punch in $35,000 CSI3* Longines FEI World Ranking Class at Live Oak International
Adcox, Keeler, Thompson and Whaley Lead Inaugural Intermediate Combined Driving Championships After Marathon »