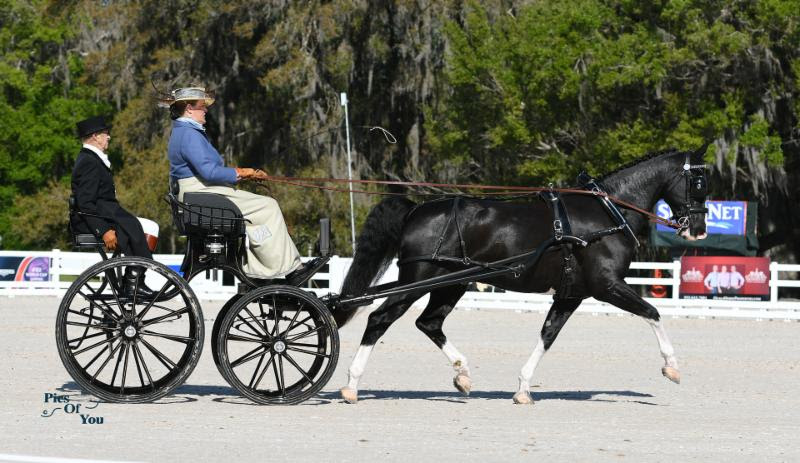 Three of the five USEF Combined Driving National Championship divisions completed their dressage tests Friday at Live Oak International with Jennifer Thompson, Kristin Whittington, and Boots Wright driving to the lead in their respective classes. This is the first year U.S. Equestrian has offered Championships at the Intermediate level, and competitors are eager to grab the inaugural titles.

Thompson, Lodi, WI, took a strong lead of the Single Horse division. She drove Funnominial C.G. to the top to start the weekend on a score of 53.84. Less than a point behind in second place is Anna Koopman, Middleburg, VA, who sits on a dressage result of 54.32 with Night Chief Lms. Third place in this competitive division belongs to Wilson Groves, Brownsville, VT, and Elegant Eeyore on 58.48 points.

“I thought he was really good in the ring. He was really focused,” Thompson explained. “I would’ve liked a little more working trot out of him. I felt he sucked back a little bit, but it’s one of those balancing acts. Do I ask him for more and have an explosion or do I just keep going with what I’ve got? Maybe I played it a little conservatively, but I was really pretty happy.”

Whittington, Edinburg, IN, took the lead in the of the Intermediate Single Pony class as the final driver of the group. She and her own Symphony earned a score of 57.44. Tayler Roundtree, Ocala, FL, took second with Taylamore Prince Harry on 60.48. A score of 62.4 gave Jennifer Keeler, Paris, KY, the third place position with Zeppo.

“I’m super excited about the pony. She did really well, especially in a new environment and her first time down centerline in the big ring at Live Oak,” Whittington said. “Just last year we broke her out as a single, and she seems super happy to be out as a single. She’s got a lot of momentum and a huge, huge heart.”

Wright, Ocala, FL, charged into the top spot of the Pony Pair Championship with a comfortable 11-point lead ahead of second-placed Katie Whaley, Paris, KY. Wright drove Marko and Mista Q to a score of 50.64. Whaley and her duo of Tommy and Teddy sit on a score of 61.76.

The first two championships wrapped up dressage Thursday with Chester Weber and Scott Adcox topping the Four-in-Hand and Intermediate Pair Horse divisions, respectively. Combined drivers take on the thrilling marathon Saturday starting at  8:00 a.m. Champions will be named on Sunday with the Obstacles concluding the driving competition.

Live Oak International is the last chance for show jumpers to qualify for the Longines FEI World Cup™ Final , April 11-15, in Paris, France, so hopeful riders will then give it all they’ve got in Sunday’s $100,000 CSI 3*-W Longines FEI World Cup™Jumping Qualifier Grand Prix, presented by Golden Ocala Golf & Equestrian Club

Live Oak International is the only show in the United States that offers both combined driving and show jumping, attracting some of the country’s most talented riders and drivers. General admission tickets are available online and at the gate for $10. Children under 12 receive free admission. Parking for the competition is also free. For those who cannot attend this year’s event, all competition can be seen live at www.liveoakinternational.com/watch-live/.

Spectators can guarantee a front row seat to the Marathon phase of the combined driving event by purchasing a tailgating spot at one of the many exciting hazards. Tailgating passes are still available and can be purchased at www.liveoakinternational.com.