Omaha by the Numbers: Who’s In, Who’s Out and Who Still Stands a Fighting Chance

The $100,000 Longines FEI World Cup Qualifier, presented by Golden Ocala Golf & Equestrian Club, is just days away at Live Oak International in Ocala, Florida. As the final stop on the North American League (NAL) East calendar, it’s the last chance for athletes to qualify for the World Cup Final in Omaha.

In other words: pressure’s on!

All told, 14 North American riders will book a ticket to this year’s Final. Four spots are allocated to the two top-placed Canadian and Mexican riders in the rankings. Three spots go to the already completed NAL West league and seven to the NAL East that will be decided in Ocala.

Come Sunday, March 12, we’ll have the final tally. Here’s where things stand going into the last North American qualifier of the season.

That leaves four spots open and 14 riders with a fighting chance going into Sunday. Of those, ten will attempt to move up the rankings in Ocala.

McLain Ward (USA) sits in pole position with 44 points. As one of the sport’s most consistent winners, Ward would seem a shoo-in for the Final. But, as a last-minute scratch from the last qualifying event at LOI, he could potentially be bumped out of the top seven.

Sitting in fifth on the rankings with 43 points is Christian Heineking, a German rider who competes in the North American League. Heineking is scheduled to compete at LOI and could strengthen his hold on the leaderboard with any top 15 finish. Fail to pin, though, and he too is at risk.

Lauren Tisbo (USA) and Keean White (CAN) round out the top seven with 36 points apiece. Tisbo is not competing at LOI and therefore cannot improve her position. White is already through to the Final in Omaha as one of the top placed Canadians. (Only Canada’s Chris Surbey, who qualified through the NAL West, has more points—41 all told.)

Hot on their heels are Luibov Kochetova (RUS) and Georgina Bloomberg (USA), who are tied on 34 points apiece. However, only the Russian is fighting for a ticket to Omaha. Bloomberg has plans to attend a wedding in Dubai that weekend. She will not compete in Ocala.

That puts Jonathan McCrea (USA) and Charlie Jacobs (USA), with 32 points each, on the bubble. McCrea has scratched from LOI, effectively ending his World Cup bid. Jacobs is still in the hunt with plans to compete at LOI. A fourth-place finish or higher would move him ahead of Ward in the rankings.

Simmering just below him, only a point behind, is Hardin Towell (USA) on 31.

The last-minute scratches and LOI absences in the top 10 has left the door open for Jessica Springsteen (27 points), Adrienne Sternlicht (23 points) and Leslie Burr Howard (20 points) to make a big move up the rankings. A top two finish could put any of them in the top seven.

Callan Solem (18 points) and Todd Minikus (17 points) aren’t out of contention either. But they’d need a small miracle to make it happen—a victory could secure either rider a spot in Omaha but only if they can out rank Luibov, Jacobs, Towell, Springsteen, Sternlicht and Howard.

Whose bubble will burst on Sunday? Whose dreams will be realized? Tune in to FEI TV or follow the LOI live results blog on March 12 at 1:30EST to find out! 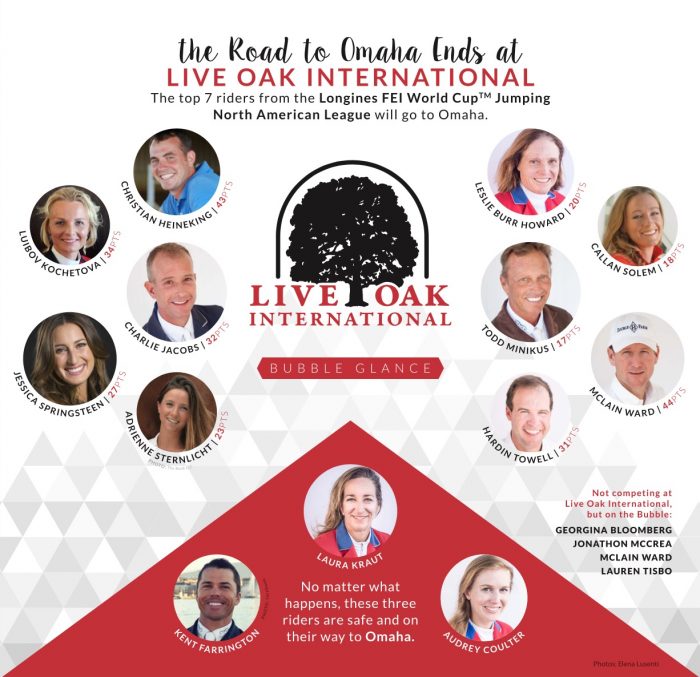