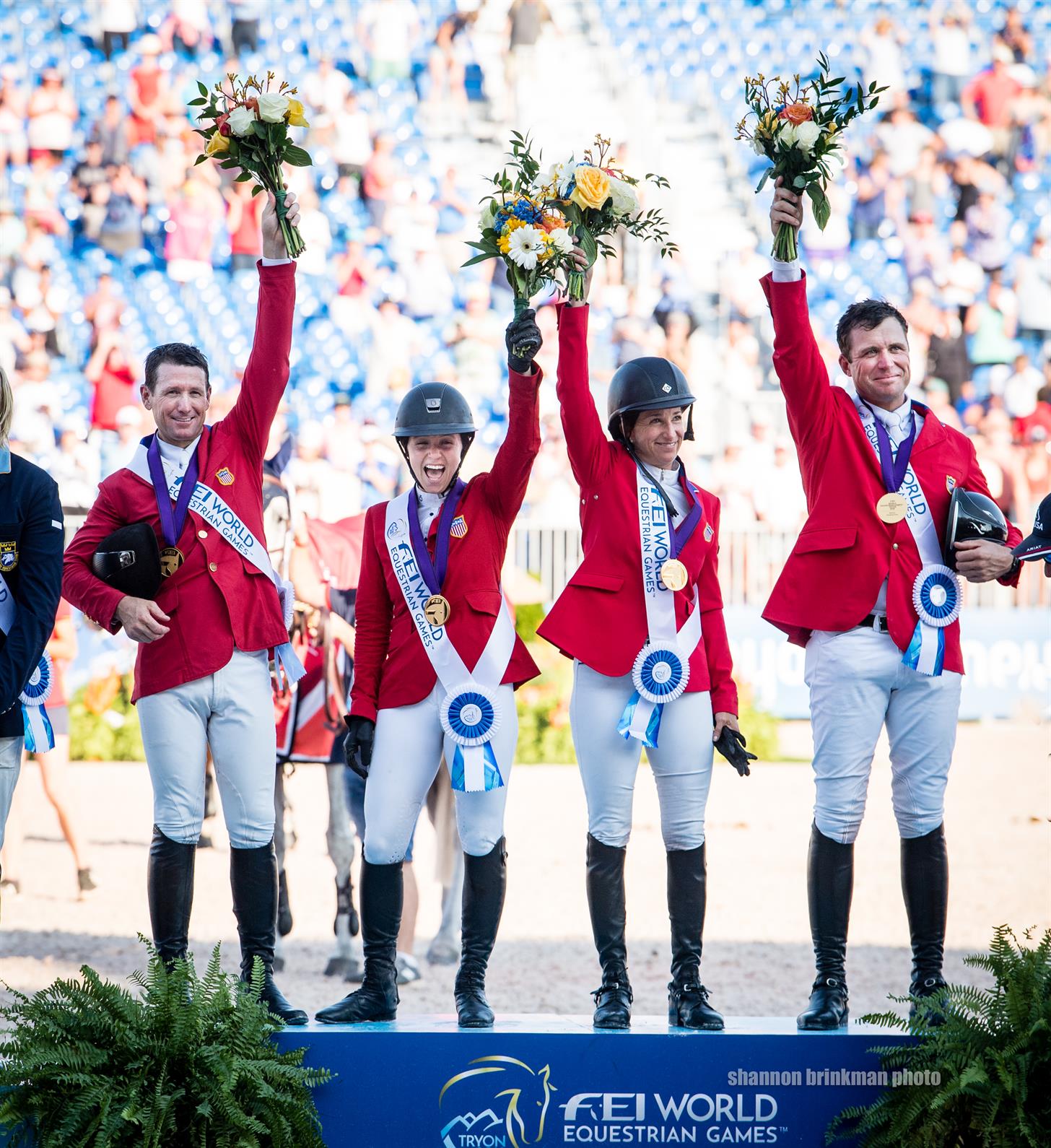 Mill Spring, N.C. – To the roars of the home crowd, the NetJets® U.S. Jumping Team secured an historic gold medal in a thrilling jump-off against Sweden on Friday, September 21, in the FEI World Team Jumping Championship at the FEI World Equestrian Games (WEG) Tryon 2018. With this incredible finish, the U.S. team of Devin Ryan, Adrienne Sternlicht, Laura Kraut, and McLain Ward, led by Chef d’Equipe Robert Ridland, easily secured qualification for the Tokyo 2020 Olympics. Their team gold medal is the first for the U.S. in a world championship since they won in 1986.

“It was unbelievable. To start with, this is our sport at its best,” enthused Ridland, who has held the U.S. Jumping Chef d’Equipe position for five years. “The odds were miniscule that there would be a jump-off for first place. We realized this was a possibility. It wasn’t what we were looking for, but the sport doesn’t get any better than that.”

He stated, “I think Adrienne said it best, ‘Let’s not wake up from this dream.’ This is what we do it for. When you’re sitting here with what you’ve been dreaming [about] for so long, you have to think back to where it all started. For us, this journey really began when we started the selection procedure in June of 2017. We had a tremendous group of veteran and young riders. If we could really prepare them through the lead-up to this and test them with fire, [we thought] we had a good chance.”

Starting out the day’s competition, Ryan (Long Valley, N.J.) and Eddie Blue, LL Show Jumpers, LLC’s nine-year-old Dutch Warmblood gelding, completed their first round of the day with a four-fault performance. Sternlicht (Greenwich, Conn.) and Cristalline, Starlight Farm LLC’s 10-year-old Bavarian Warmblood mare, also had four faults in the opening round. Kraut (Wellington, Fla.) and Zeremonie, Old Willow Farms LLC’s 11-year-old Holsteiner mare, scored an all-important clear round. It all came down to anchor rider McLain Ward (Brewster, N.Y.) on Clinta, an 11-year-old Oldenburg mare he owns with Sagamore Farm. When they had four faults, it put the NetJets® U.S. Jumping Team into a tie on 20.59 penalties with Sweden and forced a jump-off.

The atmosphere was electric and filled with anticipation as Ryan and Eddie Blue entered the arena for the jump-off. Riding over the shortened course, they tallied a score of zero faults also set by the Swedish pathfinder Henrik von Eckermann on Toveks Mary Lou.

Sternlicht and Cristalline had one rail down for four faults, equaling the four faults performance of Malin Baryard-Johnsson and H&M Indiana. Kraut and Zeremonie were fast and clear in the jump-off, keeping the U.S. and Sweden tied after a clear round from Fredrik Jönsson and Cold Play.

Once again, it all came down to Ward and Clinta. After Sweden’s anchor, Peder Fredricson and H&M Christian K, were clear in 34.43 seconds, Ward knew what he had to accomplish and he did just that. He piloted Clinta to a masterful clear round in the fastest time of the day in 32.58 seconds to win this historic gold medal for the United States. While faults were equal between the U.S. and Sweden, their cumulative times were 102.73 seconds for Sweden and 100.67 seconds for the U.S.

“I knew the situation going in; I knew a clear would win,” said Ward of his first round. “I’m very grateful that I have such a great team, delivering great scores. Laura was clutch today. I’m glad I got a second opportunity to help our team win.

“In that moment, you’ve got to do your best,” he continued. “I’m very grateful to Robert. I’m very proud of my student [Adrienne], I believed in Devin, and Laura’s always been brilliant. They came through brilliantly. This is what’s great about America; many different personalities, many different people, trying to be great, fighting, trying to be their absolute best. In the end, I’m so proud of that and to be American today. This is truly who we are.”

Speaking through her “tears of joy,” Sternlicht expressed, “I really, really, really don’t want to be woken up from this dream. I love this horse so, so much. McLain [Ward] is the most unbelievable mentor for me and such an important part of my life. For me, it’s been a battle of overcoming my own mind. I’m so grateful that Robert [Ridland] trusted me to put me on this team. To be with Laura [Kraut] and McLain [Ward] and Devin [Ryan], honestly three riders that I’ve looked up to my entire life for various reasons, it’s invaluable experience. I can only grow from this and I’m so grateful for this opportunity.”

Ryan, who is riding in his first championship along with Sternlicht, acknowledged the incredible year he has had leading up to this gold-medal moment.

“A lot has changed over the past 12 months for me,” said Ryan, who was also runner-up in the 2018 Longines FEI World Cup™ Jumping Final with Eddie Blue. “It was my breakthrough year. I’ve been working my way up the ranks building a business, bringing along young horses, and it’s finally paid off a bit. I’ve learned a lot this week. It’s my first real championship and this year is the first year I’ve actually been on a team. The team starts with my family, my owners, and all of these guys. It felt good to be able to produce that clean round for the jump-off.”

Kraut reminisced of her last gold medal-winning performance in the 2008 Hong Kong Olympic Games, which was also won in a jump-off, and felt that winning in the United States in front of a home crowd made it even more special.

“It was amazing sport. I don’t think we’ll ever see something like this again,” she said. “Thanks to everyone here and our supporters and owners for this opportunity. At my age, it’s great! I’m going to brag; I think we have the best support system in the world, for sure. The list is endless of the people that are making this happen for us. They do everything to make our job as easy as possible and they’re incredible. I still can’t believe it.”

With the U.S. in gold and Sweden winning the silver, Germany rounded out the podium in bronze.

All four U.S. riders will advance to Sunday’s individual final. They sit in the following places with accumulated penalties (not including the jump-off):

The NetJets U.S. Jumping team will compete on Sunday, September 23, at 9:45 a.m. ET for the individual final. The top 12 return for a second round on Sunday to determine the individual medals.