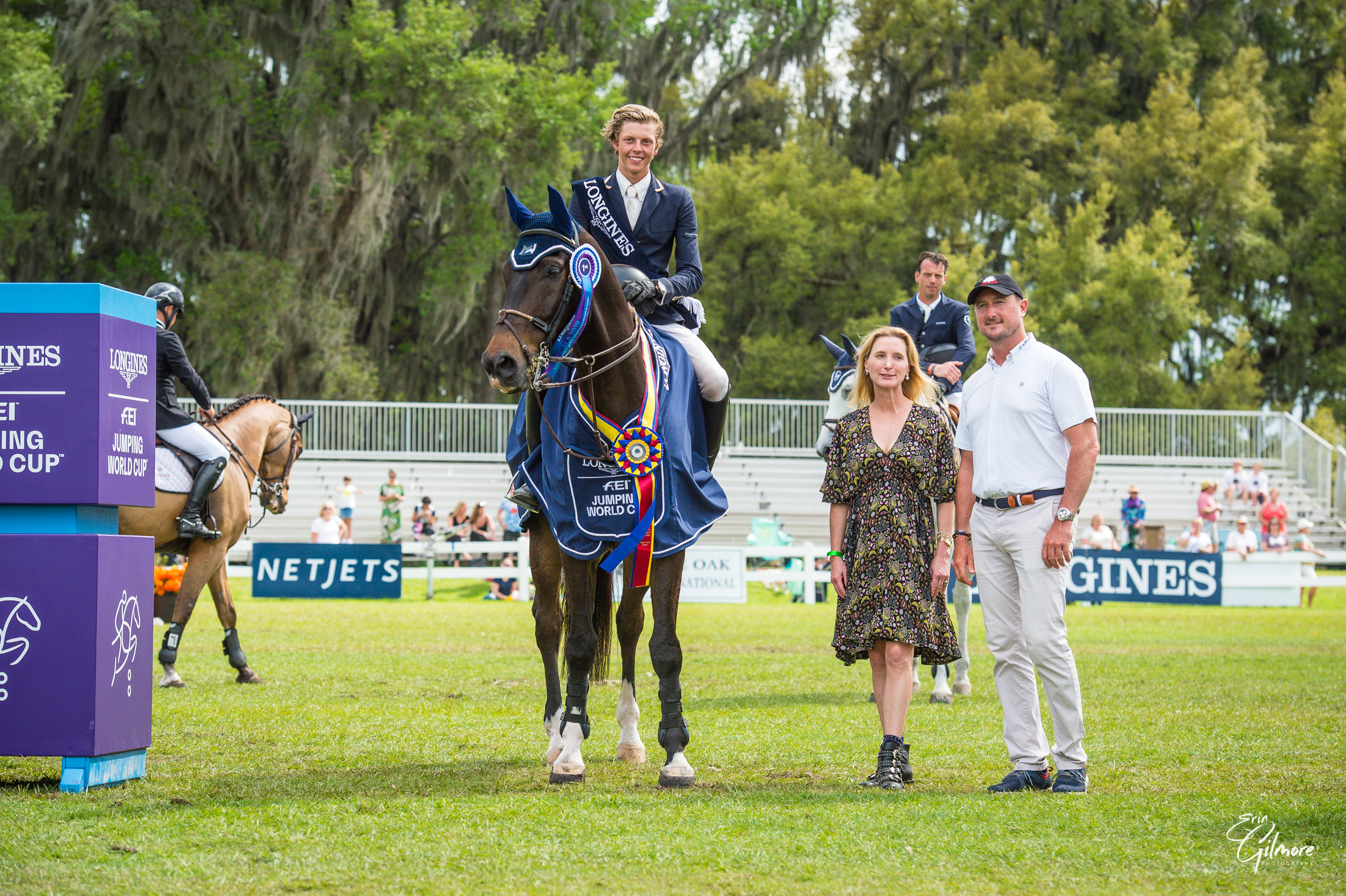 Ocala, Florida – March 10, 2019 – In a field brimming with experience and talent, it was the the young gun, 17-year-old Brian Moggre, who managed to win the $100,000 Longines FEI Jumping World Cup™ Ocala Sunday at Live Oak International.

Riding Major Wager LLC’s MTM Vivre le Reve, Moggre, who also won Friday’s $35,700 CSI3* Longines World Ranking Competition, earned the first clear round of the jump-off, and his red hot time of 41.29 seconds was unmatched by the rest of the group.

“I have to say I had low expectations for myself, but I never do for my horses. I really wanted to go in today and jump a clear round. That was the main goal, so once that happened I went pedal to the metal in the jump-off,” Moggre said whose win came in his first-ever FEI World Cup class.

Of the 38 starters, six made it to the jump-off over the course designed by Olaf Peterson, Jr. While several riders fell victim to a spooky wall at fence 10, the exciting jump-off thrilled thr crowd of nearly 5,000 spectators which brought to total for this year’s Live Oak International to a record 15,000.

“This is a World Cup Qualifier, and in the [2019 Longines FEI World Cup™ Final] we will see scary things, and you need to test those things in this class,” said Peterson, referring to the wall. “For some horses it was difficult, but for me it belongs in this class.”

Of the six who returned to test their skill against the clock, only three: Moggre, second-placed Andre Thieme, and third-placed Sharn Wordley, jumped a final clear round.

Germany’s Thieme made quick work of the stout track with his and Turnierstall’s Aretino for second place. He had complete confidence in his horse over the dodgy wall, so he turned all his focus on the clock to finish the jump-off in a time of 41.56 seconds.

“I knew my horse had seen walls like that. That’s why I was very sure that I was going to make the time because I knew I could go short to that wall and make up some time. I think that’s what got most of the people. They wanted to get there straight, so they went farther out. For me that was the most difficult jump because it was so different.”

New Zealand Olympic veteran Sharn Wordley went all in with Sky Group’s Casper. Their jump-off time of 43.96 seconds landed them in third place. For his overall performance through the tournament’s four classes, Wordley was awarded the $10,000 NetJets, Inc. Leading Rider Award as the rider who accumulated the highest number of points over the three days of show jumping competition.

“We had a good show, we always have a good show here. I’ve been coming since its inception, and it’s a favorite of mine on the circuit. Sometimes you have shows you just do well at, and I always do well here, so I keep it on my calendar. This is one of the nicest horse shows you can find anywhere. The facility is magnificent, and I tip my hat to Chester and Juliet for all they do.”

The $5,000 Jerry Parks Insurance Group Leading U25 Rider Award was presented to Kelli Cruciotti as the U25 rider who accumulated the highest number of points over the three days of show jumping competition.

About Live Oak International
Started in 1992 by Chester Weber, the reputation of Live Oak International has grown each year. Now run by Co-Presidents Weber and his sister, Juliet W. Reid, the show is a world-class equestrian event and is the only tournament in the United States that offers both combined driving and show jumping. For more information about the event, please visit
www.liveoakinternational.com