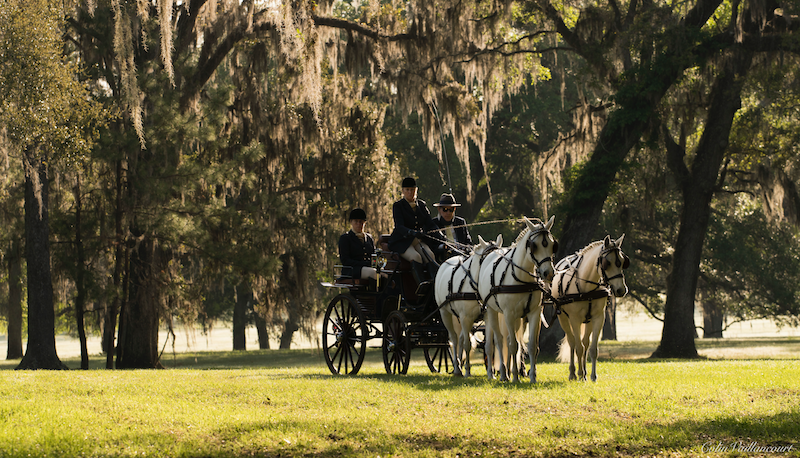 Insulting, indefensible, ill conceived – that’s what first came to mind when I learned recently of the proposal for a new interstate turnpike (routes D1 and C2) to run right through the middle of Live Oak Stud. I ask that this new turnpike proposal in Marion County formally be removed from consideration immediately.

After 50 years of hard work, this is not just a lovely farm outside of Ocala, FL. Live Oak Stud is one of the premier race horse breeding, training and racing facilities not only in Marion County or in the State of Florida, but in the world. The results from Live Oak Plantation (the racing division of Live Oak Stud) speak for themselves, most recently the win at the Breeders’ Cup Mile in November of 2017 and the Eclipse award for homebred World Approval.

Live Oak Stud is about a great deal more than only its outstanding race horses. It is also a significant livestock breeder and has a thriving cattle operation with hundreds of black angus, Brahman and Charolais. Live Oak Stud is also home to the largest spectator event in Ocala each year, the Live Oak International horse show.

Tens of thousands of visitors enjoy the spectacle of world-class show jumping and combined driving annually at Live Oak International. These two horse disciplines are exceptionally enjoyable to watch and are paired together at Live Oak and nowhere else in the USA. This event draws tourists and residents alike and top competitors travel from around the world to participate. Please see this short video from the 2018 show: https://vimeo.com/266400131

My business, Live Oak Combined Driving Inc., is also based at Live Oak Stud. I am the 15-time US National Four-in-Hand Champion and have recently been ranked number one in the world. I work with my team of horses daily at Live Oak Stud to be prepared to take on the best of the best in the world while representing Team USA.

What is more, the proposed turnpike would travel directly over my new home. My wife and two young sons live with me there. Additionally the primary training barn and track for the race horses, the barn for the yearlings, the Normandy barn, and the barn for my combined driving team and critical portions of the show grounds for Live Oak International would be paved over by the C2 and D1 proposals.

This farm is a significant part of the larger economic engine of Ocala. Live Oak Stud, and the other businesses described here, employs hundreds of people and whole families over generations. We are not some theoretical study showing economic benefit in the future. Live Oak and related businesses are major employers, investors and taxpayers in Marion County and have been for 50 years. We plan to continue to be so for generations to come. These large economic benefits to Marion County did not happen by accident. Decades of hard work and substantial investment have created this world-class farm.

For the Florida Turnpike Enterprise to provide the proposed routes for the so-called “Coastal Connector” on April 26, 2018 for the first time, and to seek public comments apparently no later than May 15 is, frankly, insulting.

The materials included in the project’s web page indicate that public comment is welcomed, has been welcomed, and that this is only an early step in a long process. But a fourteen business day public comment period after releasing the proposed routes for the first time regarding something that would create such massive value destruction is an outrage. Hosting only one public hearing in Ocala on the proposed routes for the new corridor is absurd. This is an issue of such importance and significance that it deserves the input of all residents and visitors to Ocala alike. This process of collecting public input is entirely flawed and is unacceptable. I ask you, what’s the rush?

I have yet to learn of ANY business or resident in Marion County that is in favor of this new turnpike. There is universal agreement against it. What is controversial is the process you are responsible for that brought this ill-conceived idea forward in this manner.

The notion that there has already been extensive previous public input (the I-75 Relief process or the “kick off” meeting in October) that has drawn the conclusion that a new turnpike corridor needs to be studied is nonsense. Discussing transportation alternatives in general is an entirely different thing than showing specific corridor routes on the map. The huge difference in the public’s attendance at the I-75 Relief meetings and the “Coastal Connector” meeting on May 1 confirms that emphatically.

The two routes, D1 and C2 that would divide Live Oak Stud in half would cause irreversible harm, hardship and unacceptable devastation to this property. These proposals themselves have already created uncertainty in the entire Marion County real estate market and that is serious hardship of its own. Trying to build your way out of (supposed) congestion is like giving an obese person a larger belt. It won’t do much good.

I am also extremely concerned about the irreversible damage to the environment from this proposed turnpike. Knowing the exceptional record of environmental stewardship that we have enjoyed at Live Oak Stud and our close cooperation with the State of Florida environmental regulators, this proposal would ignore decades of protecting the fragile aquifer. The combination of direct and indirect impacts to the environment (air, water, farm land, noise, lumen trespass, forest, wetland, historic resources, wildlife habitat, etc) from this proposed turnpike will be so large as to be unfeasible.

Live Oak Stud is in the designated “Farmland Preservation” area in the comprehensive plans for Ocala. This proposal thumbs its nose at this important local planning process. This property is also in the “Spring Protection Zone” of the local comprehensive plans due to the first magnitude Rainbow Springs recharge zone. I see no reference to these comprehensive plan designations in the Coastal Connector web page.

It is this farm and our many other neighbors that are the economic engine of Marion County.   The economic impact of the horse industry in Marion County is well documented as a multi billion dollar annual benefit creating tens of thousands of jobs. This proposed turnpike, whatever its alignment, would imperil those benefits.

I oppose the two corridors that directly impact my property, but I also take the position that before any new corridor is even proposed anywhere in Marion County that a great deal more review is required. Making certain that the existing infrastructure, not only roads but also freight rail, is in good repair and functioning at capacity is an obvious first step before proposing hundreds of billions of dollars in new disruptive construction.

I also question the faulty logic that a route for this toll road through Marion County will help congestion on Rt. 75. Since this proposal would connect to Rt. 75 south of Gainesville, it seems so obvious to point out that a route that connected to Rt. 75 north of Gainesville would do a far better job of reducing congestion on Rt. 75.   That would mean a route farther west of Marion County. If the justification for this road is to be remotely believable, that more western route and its congestion benefits, also needs significant study.

Live Oak Stud has recently seen the long reach of eminent domain take more than 2 linear miles of Live Oak’s precious property for “fair market value” in order to widen State Route 40. We have already sacrificed significant land and endured dramatic disruption to our operations to improve the transportation mobility of Marion County and reduce congestion. We have done our part. That process has not been easy but it was trivial compared to this turnpike corridor proposal. What we saw there we are, sadly, watching again. Various assurances that this process is in its early stages and public comment is welcome will likely be followed by a fait accompli route selection that can’t be changed.

The critical element that these transportation planners have missed is that the very reason that Ocala has grown and enjoyed economic success is because of the soils and other conditions that are so beneficial to horses. The lime found in the limestone rock in our area as well as the high quality fresh water combine to produce outstanding grass to feed these special animals.

The farms followed these rare soil attributes to this place and, over many years, prospered as did the jobs and the many support services. Ocala’s horse industry has prospered not just because of the favorable climate alone. These special conditions are not replicated even 40 miles in either direction, or anywhere else in Florida, they occur only in Marion County near Ocala.

But this proposed turnpike corridor does not just run through this particular area, it runs through many of the most valuable horse farms, the most valuable real estate, in the County. It is not just Live Oak Stud that is threatened here, it is the entire economic engine of the region. You turnpike planners don’t seem to have any idea why the horse farms are in Ocala or why this particular land is so valuable.

The fact that there is a need to spend time and resources defending Live Oak Stud and the other great farms of Marion County from this proposal, in itself, is unacceptable. Live Oak has been a good neighbor, significant tax payer, and active in giving back to our community for half a century. To be treated this way is wrong.

Live Oak Stud and the many other nearby farms are, in some meaningful way, the long term stewards of this prime equestrian land. Future generations are, supposedly, the focus of the turnpike planners. But what about the future generations of horses and their owners, trainers, riders, spectators, and the many related industries? Who is taking the long view for the greater good here, really?

The planners or consultants responsible for this proposal have focused on connecting the two coasts, hence the name “Coastal Connector”. It is as if the valuable and important land in between Tampa and Jacksonville doesn’t matter. We are not less important than people who choose to live near the water. The irreplaceable environmental resources here are not less important. Drawing a line for a road on a map seems easy as these farms represent large open areas and fewer property owners, but a new turnpike will never compare to a majestic 200-year-old live oak tree or a young colt playing on a chilly spring morning. Once lost, this special place can never be replaced.

The logic that, somehow, there is some demand currently or may be in the future for additional lane miles of highway, and therefore the destruction of Live Oak Stud is justified is absolute nonsense. To be able to reach Dunnellon 13 minutes faster, as is described in the Coastal Connector materials, makes the convincing case for no new turnpike at all. This toll road would produce an unacceptably large amount of negative impact for a small amount of supposed benefit. It would do far more harm than good.

Even if a new turnpike corridor is necessary, which we dispute entirely, then the choice of routes through Live Oak Stud is insulting, indefensible and ill conceived. This process of announcing five possible routes through Marion County has already created significant damage to the local real estate market and will continue to do so until resolved. We are already experiencing a serious hardship because of your recent actions.

It is the special conditions of soil, grass and water that have created the valuable and unique economic engine that is found in the equestrian industry of Marion County. To overlook that is to loose all credibility for this undertaking. I encourage you most strongly to reconsider this proposed “Coastal Connector”. I ask that the new turnpike through Marion County be formally removed from consideration immediately.