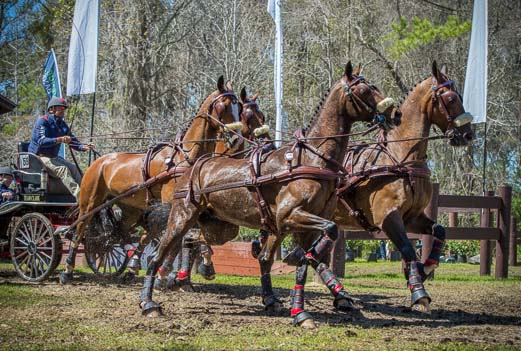 Chester Weber took a commanding lead in the 25th Anniversary of Live Oak International on Saturday with a victory in the marathon phase of the combined driving competition in his quest for a 13th USEF Four-in-Hand National Championship.

With the win, Weber has won the two first phases of the three-phase competition. On Thursday, Weber with his team of KWPN Dutch Warmbloods: Boris W, Danzer, Para and Ultra won the driving dressage test with a score of 45.25.

“I was really, really pleased. The gate broke records today. There are great, great things that have happened for Live Oak today. It was a great feature day for driving and I was also really tickled with the horses today. They did a great job. That’s what we are all here for. It’s about these horses,” Weber said.

Allison Stroud was second in the marathon for Four-in-Hand competition. She also finished second in dressage.

Suzy Stafford and her Hall Of Fame Morgan PVF Peace of Mind won the marathon for FEI Single Horse. She also won the initial dressage day to keep her firmly in first place.

Stafford said she found the course both challenging and entertaining.

“The Ariat was extremely technical. It had a lot of jagged lines. I took a little bit tighter route than I should have. That one was my nemesis I would say. I would say my favorite one was the water hazard. I have a Morgan horse and she is extremely powerful and extremely bold so she made it really easy for me to drive that hazard,” Stafford said.

Peace of Mind, known as “Hunny,” was the 2015 USEF International Horse of the Year and was named to the Horse Stars Hall of Fame for 2016. Stafford is seeking a third straight USEF Single Horse Driving Championship. Sterling Graburn was second in the marathon.

Sunday is the final day of the event and closes the driving competition with the obstacles phase. The overall winner of the three events wins their division.

Little had to go to a jump-off with her mount, Corona, to get the win. Little and seven others posted clear rounds to move to the jump-off.

“I put in the best clear round we could and hoped that the others wouldn’t catch me. We got lucky today,” said Little, adding that she will run Corona in Sunday’s $100,000 Longines FEI World Cup™ Jumping Qualifier.

Emily Short, of the United States, took an early lead aboard Coco II with a jump-off round time of 38.59. She held on to first until Little went, in second-to-last position, and posted a clear round with a time of 35.38.

“I just wanted a clean round. My horse has a huge stride so that helps me especially in a big field like this one,” said Short, who recently began competing full-time after graduating from college.

Adam Prudent was third with Vasco. He has a time of 34.88, but had four penalty points for knocking down a rail.

“Marilyn is a very fast rider and I did feel the pressure a little bit. The rail I left was to my horse’s left and I made a bad turn. You can’t win them all, but I’m very happy,” Prudent said.

Prudent has had a good Live Oak International run after he won both classes on Thursday. He won the CSI3* $35,000 Sovaro 1.50m Jumper event with a time of 60.24 seconds. He also won the $10,000 Waldron Private Wealth 1.40m Power & Speed event. Prudent and Si Bella went through the course fault-free in 30.16 seconds.

He is pointing Vasco to the $100,000 Longines World Cup™ Qualifier on Sunday, setting up a possible rematch with Little.

For full results, go to liveoakinternational.com.