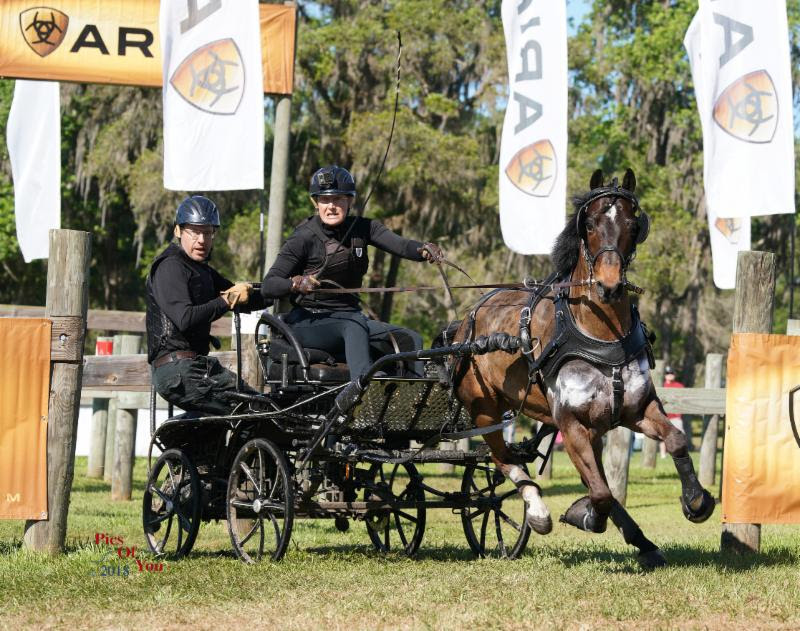 Spectators  flocked to the beautiful Live Oak Plantation Saturday for the exhilarating Marathon phase of the five USEF Combined Driving National Championships being held at Live Oak International. Gabor Fintha’s challenging course put drivers to the ultimate test as they carefully piloted their quick-footed equine athletes around his tricky hazards.

With his eye on an unprecedented 15th Four-in-Hand Championship, Chester Weber, Ocala, FL, and his talented team kept control of the competitive class, picking up just 123.58 points across the Marathon for an impressive two-phase result of 163.69.

“There’s a lot going on for my entire family and the crew here to produce this tournament of sport, but I try to jump on the carriage, clear my mind and do my best,” Weber said, “I was pleased today with the horses. They really performed well for me and I think they’re in a good way as [FEI World Equestrian Games] approaches.”
Lisa Stroud’s quick maneuvering launched her from third to second place after the Marathon phase. Stroud, Kennett Square, PA, carries 180.87 points into Sunday’s Obstacles finale.
“It’s a really fun, challenging course here. Lots of good questions are asked. I’ve been really fortunate with 10 years of experience with the ponies,” she said of her background in the sport. “The ponies weren’t little. They were big, so the transition to horses was not as difficult because it’s the same style of driving. That’s been really helpful.”
James Fairclough, Newton, NJ, drove his team into third place. He picked up 133.59 penalties Saturday for a current score of 189.34.
This is the first year that U.S. Equestrian has offered Intermediate Combined Driving National Championships, and the competition is fierce as drivers shoot for the inaugural titles.
The Single Horse competitors headed out on course first with overnight leader Jennifer Thompson, Lodi, WI, staying on top of the 12-horse group on a score of 140.73. Taylor Bradish, Windsor, SC, had the best marathon score in this group (83.20), which moved her from fourth to second place on 142.24 points.
In the Intermediate Horse Pair division, Scott Adcox, Sarasota, FL, is in the leading position with 165.95 points. Second-placed Shane Doyle withdrew from the competition ahead of the marathon. Jennifer Keeler, Paris, KY, mastered Saturday’s marathon to move into the lead of the Intermediate Single Pony Championship. Her marathon result of 82.30 gives her a currentscore of 144.7 points. Janelle Marshall, Williston, SC, moved into second place on 145.89 points with the best marathon trip of this class. She will keep the pressure on Keeler in Sunday’s exciting finale.
he 2016 and 2017 USEF Advanced Pony Pair Champion Katie Whaley, Paris, KY, relied on her experience on Saturday’s marathon to move into the lead of the Intermediate Pony Pair Championship. A Saturday score of 140.29 edged her just ahead of dressage leader Boots Wright, Ocala, FL, who has a two-day score of 143.37.
Drivers now look ahead to Sunday’s nail-biting Obstacles phase, where five new national champions will be crowned. The competition gets underway at 8:00 a.m.
Live Oak International is also the last opportunity for show jumping riders to qualify for the Longines FEI World Cup™ Final , April 11-15, in Paris, France. Hopeful riders will give it all they’ve got in Sunday’s$100,000 CSI 3*-W Longines FEI World Cup™Jumping Qualifier Grand Prix, presented by Golden Ocala Golf & Equestrian Club.
Live Oak International is the only show in the United States that offers both combined driving and show jumping, attracting some of the country’s most talented riders and drivers. General admission tickets are available online and at the gate for $10. Children under 12 receive free admission. Parking for the competition is also free. For those who cannot attend this year’s event, all competition can be seen live at www.liveoakinternational.com/watch-live/.
For results, visit www.liveoakinternational.com/show-results
« Tisbo Tops $35,000 CSI3* Longines FEI World Ranking Class at Live Oak International
Weber Claims 15th USEF Four-in-Hand Combined Driving National Championship at Live Oak International »